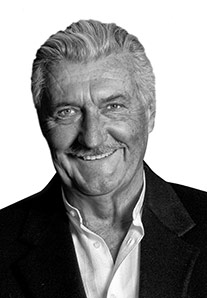 There was once a boy who fell in love with beauty and he expressed this passion by using his camera.
That is the beginning of the story of Franco Ferraro, who is today still at the helm of his company called Child, whose beating heart is in Serravalle Sesia in Piedmont, in a valley dominated by the majestically beautiful Monte Rosa.
In the 60’s Franco Ferraro had not long entered of the world of photographers working for “Epoca”, an Italian weekly magazine which has made history in the publishing sector for the quality of its photographic images, when he was invited to curate the image of Lanerie Agnona, a world leader in the manufacture of high end fabrics. Franco founded the eponymous magazine which presented the Agnona collections with the collaboration of great photographers such as Oliviero Toscani, Gian Paolo Barbieri, Bob Krieger and Ugo Mulas…
From photos to fashion: soon after this Franco Ferraro set up his very own company, Child, creating ranges of clothing which would meet with the tastes of nations that are quite distinct from each other, from Japan to the United States and Australia. And the story goes on. Today Franco Ferraro achieves his own ideal of balance and beauty with his daughters, Chiara and Ilaria, who are responsible respectively for the creative and administrative departments of the firm.  While his son Davide stands at his side in the management of the family business.

This website uses cookies to improve your experience. We'll assume you're ok with this, but you can opt-out if you wish.Accept Read More

This website uses cookies to improve your experience while you navigate through the website. Out of these, the cookies that are categorized as necessary are stored on your browser as they are essential for the working of basic functionalities of the website. We also use third-party cookies that help us analyze and understand how you use this website. These cookies will be stored in your browser only with your consent. You also have the option to opt-out of these cookies. But opting out of some of these cookies may affect your browsing experience.
Necessary Always Enabled
Necessary cookies are absolutely essential for the website to function properly. This category only includes cookies that ensures basic functionalities and security features of the website. These cookies do not store any personal information.
Non-necessary
Any cookies that may not be particularly necessary for the website to function and is used specifically to collect user personal data via analytics, ads, other embedded contents are termed as non-necessary cookies. It is mandatory to procure user consent prior to running these cookies on your website.
SAVE & ACCEPT